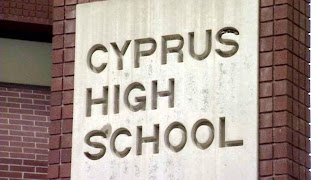 Yeah, that’s a chant nobody’s gonna be too proud of.

I spent my Sunday night chatting with my buddy who’s in college across the country. We both went to Cyprus High School far west of Salt Lake City. 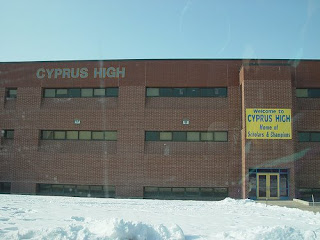 We always joked of how ‘bad’ the school was. It its 100+ year history it burned down, burned down again, and then began sinking. We also would poke fun at how the school almost lost its accreditation while I was there.

Well, I had no idea how close I was! Tonight, I found KSL has posted a new site looking at high schools in Utah. My beloved high school ranks 79th in the entire state. (We only have 83 schools).

In the district, we were third from the bottom, beating out Granger High and the school for special needs students.

Oh snap! Oh well, at least we have a few cool facts. We were the only school to have a “galley” instead of a cafeteria (albeit they look the same) and a block-letter “C” on the mountain.

Of course, KSL has it entirely wrong. According to a “principal’s letter,” they say:

Cyprus High is the only school in the Salt Lake Valley that has an electronic, block-letter “C” on the side of the mountain west of the school.

What the? The block letter is most certainly not electronic! It’s made of gravel!

Look, I’m an idiot who graduated from your “3rd-worst-school-in-the-district” and even I’m not gonna fall for that!

Oh hey … A.D.D. minute: I just discovered one of KFC’s co-founders attended there!

Have I posted this before? Best … ad … ever!

After my poor industry spend the last ten years getting wasted, it’s now stumbled out...

By my own free will, I am posting HTML code for a web poll. View...

Alright, here we go for the month of July! More fun and less logical than...

Not enough money? Worried about getting diabetes? Courtesy: YouTube Want me to stop asking you...

Thanks to the users of YouTube, 1980’s filmmakers, and a healthy disregard for our out-dated...