I left my parent’s house yesterday with the intention to quickly pick up a friend at the airport and bip down to Provo. 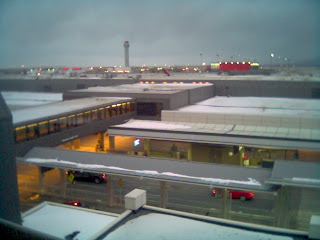 Unfortunately, the flight was delayed until 5’oclock. So I drove around the airport aimlessly. Did you know they have a golf course there?

Eventually I got bored and parked in the garage.

But it turns out a lot the weather was delaying a lot of flights, and my friend had to wait for hours in Las Vegas because there was too much fog in Burbank for the plane to take off.

I guess our delay wasn’t the only one: 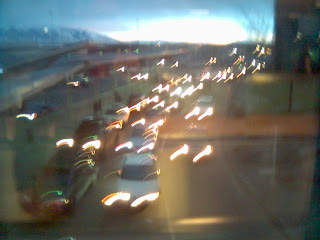 Finally we got out on the road about 6 o’clock, figuring we’d get to Provo an hour later. Then everything melted down in Lehi.

A quick tune to Utah’s station for breaking news, emergency traffic, severe weather, and local talk told me that some poor driver flew off the freeway into a telephone poll.

And that shut down the 15 freeway completely. See how even the north-bound side is empty? 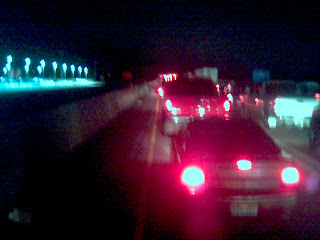 Well, I finally did make it home.

Google Maps says my total drive should’ve been 58 miles. My odometer reads 82 miles, which means I “explored” the airport for nearly 25 miles. But even with 82 miles, we only averaged 20 miles per hour.

Well, once again I ruined a perfectly good Jim Henson masterpiece, and insulted Denny’s to...

And to think: If I am climbing these, it means I found a good parking...

I had a term paper due about an hour ago. I has partially forgotten about...

I was only parked for a couple of hours. Oh, how I want to move...

I certainly wasn’t expecting to get this for my birthday this past Wednesday: