The street I grew up on is one of those half-mile block streets that stretches halfway across the valley. Well, most of the way. There’s a big chunk that recently opened connecting two sections.

Unfortunately, the subdivision developers who actually constructed the roadway set the speed limit at an abusively slow 25 miles per hour. It’s been a great speed trap for West Valley City, I’m sure.

Until this little gem today … 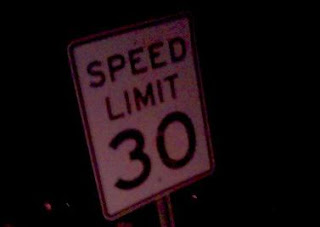 Although it’s not a significant improvement, it’s getting closer to the the much more tolerable 35 mile per hour limit on both sides of the subdivision area.

My theory is that the city is slowly raising the limit to 35, but is only doing to at 5 miles per hour per year. That way the residents won’t notice or complain.

If this theory holds true, I’ll be able to fly from my parent’s home to the local Wal-Mart in less than 4 minutes at 65 miles per hour by the year 2015.

Everyone is doing that blog thing. So I’m gonna do it to. Just to copy...

Thanks to the users of YouTube, 1980’s filmmakers, and a healthy disregard for our out-dated...

Alright! Here it is! After several months work, Mark and I finished off the documentary,...

I think yes. Cable News networks have a lot of time to fill. Twenty-four hours...

Now, I’m by no means a “sports person,” but this sports story caught my eye:...