The producers of The Office are so busted, again!

In this week’s episode, Michael and Pam are supposed to be leaving a branch in Utica, New York heading toward Rochester. But the “snow” we see on the ground is the magic of Hollywood.

Because Steve Carrell is not in the Empire State. He’s just off the 405 in Ventura County. 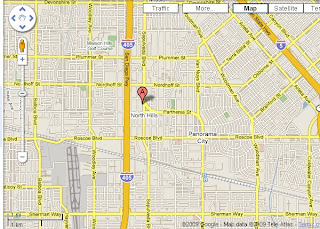 What tipped me off was the bus that passes by. I know I’d seen it before. Sure enough, a Google Image search of L.A.’s “Foothill Transit” bus … 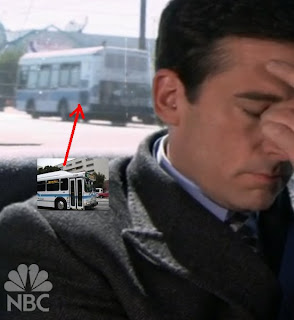 So, I knew it was L.A., but I wasn’t sure where. So I kept reading signs. I don’t know if the post-production people purposely blurred signs or not, but I finally could make out “Sepulveda Blvd” on one. Then I needed a business… 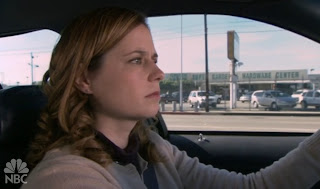 Tada! A Google search of the business on Sepulveda led me right to the spot. 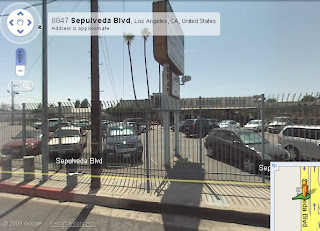 What’s amazing are the two palm trees right in the middle of the shot. The editors must have gone in and Photoshopped them out.

Finally, the traffic lights. Los Angeles traffic lights with a distinctive look to them: A curved top with a large blue signs that hangs from the pole. A contrast from the green ones we usually see. 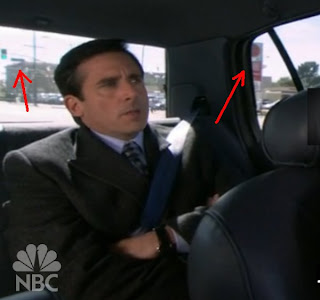 But again, no match for “The Google.” Of course, the artists at NBC are at work erasing the “76” station’s logo. After all, that’s a west-coast fuel chain. 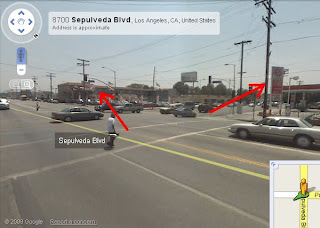 So, there you have it. Michael and Pam never left the TMZ.

It appears her cause lives on! And what an endorsement: A driver of this old...

Well, once again I ruined a perfectly good Jim Henson masterpiece, and insulted Denny’s to...

Even Homer recognizes what so many of my fellow dudes do not: Purchase: Season 17,...

Unlike Will Ferrel, the podcast isn’t dead. But I figure I owe you all an...

It’s not hard commercial copy to read: “Norelco … with a shave so smooth, even...