Reading Tom Taylor’s newsletter on Friday morning, he begins to worry that the economy is going to force the nation’s largest radio owner, Clear Channel, into national programming.

For those of you not up to speed, Clear Channel started life in the mid-1990’s as a relatively small radio owner (with 25 stations or so). But after talking banks and stock holders into giving them the cash they need, the Mays brothers of Austin, Texas expanded their empire to over 1,000 stations by the turn of the century. That’s also thanks to some changes in FCC policy in 1996 that removed protections that prevented media monopolies, but that’s another discussion for another day.

Unfortunately, Clear Channel purchased all their stations at the wrong time. Because they were gobbling up stations, it seemed everyone wanted to buy, too. Sometimes Clear Channel would buy a station for two or three times it’s actual value.

That created a problem. Ad revenues didn’t triple as well. They stayed flat. And like any big corporation, who was the first to go? The staff!

Unfortunately, this slowly backfired on the company. What they didn’t realize is a radio station’s main asset is its talent. Sure, the transmitter will always have some intrinsic value. After all, in 1980 the only way to reach a broad audience was over radio or TV.

That’s become less true today, than ever. I’m a radio nut, and I don’t listen for music much anymore. I listen to Pandora. It’s commercial-free (although I still haven’t figured out how they make money).

Clear Channel saw the writing on the wall. Having fired most of their talent and seeing their stations slowly becoming worth less and less, they bailed on Wall Street. Somehow they talked a private equity firm into buying ’em up. Managed to pull it off right before the crash, too!

Unfortunately, like all private equity firms, the new owners of Clear Channel planned to “squeeze the orange” and cut even more staff. Now they are probably waking up to the cold reality that there is really no more staff to cut.

Most stations pre-record (or voicetrack) their shifts, using a talent in one city to DJ in several others. Ryan Seacrest’s syndicated national show is on nearly all of the company’s CHR (Top 40) stations. There’s nothing left to squeeze.

Losing localism is the next frontier. These savvy new owners may begin to start phasing out local programming and music selection over the coming year. They’ve already done it, adding Seacrest and Elvis Duran in the morning and afternoon day parts. If they could lay-off a whole bunch of programmers and air talent. 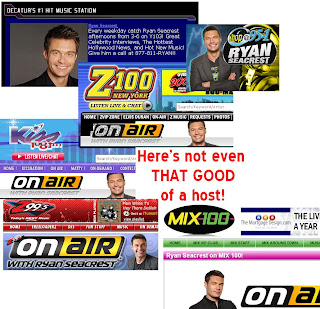 The FCC should never have allowed this to happen! The root of the problem is corporate owners being forced to work with a huge debt service to pay! They can’t afford to stay afloat, and make a profit, so they cut local staff.

This hurts you, the listener! If there’s a school cancellation, how many stations in your town have a local jock on the air at 5:30 A.M. to tell you before you get up for work? If a tornado was heading for your community, who on the dial (besides the garbled E.A.S. alert voice) would warn you?

Radio, TV, and newspapers are the most local of local media. To see radio go national (which is already has on talk radio) is as sad as seeing your TV newscast filled with celebrity gossip, and the paper covered in the latest Washington scandal, while the mayor and city council roam free, doing as they please.

Radio is just as critical as the other mediums for keeping the community healthy. National programming doesn’t help the goal, it hurts it.

It’s not hard commercial copy to read: “Norelco … with a shave so smooth, even...

I had a term paper due about an hour ago. I has partially forgotten about...

Last fall I kicked the officers in blue onto the naughty list for their “penalty...

On Chinese New Year, Beijing suffered what some might call a “terrible disaster.” It all...

Are you a Radio Citrus fan yet? Well, we are just days away from the...