We ordered our food right as a crowd of people hungrily clawed their way inside behind us. Between chatting politics and general tiredness, I failed to notice that it had been over 20 minutes and neither of us had food.

We walked over to find Rich’s food there, but not mine. About eight other hungry people were milling about. I figured my French Dip and accompanying Philly Beef were still merrily sizzling away in the patented Arby’s cow processing oven.

After another ten minutes, I decided to hang around by the counter. The food worker asked me what I was waiting for, to which I showed her my receipt.

“That?” she said. “Oh somebody already took that. Was it your friend.”

No, Rich had the chicken. 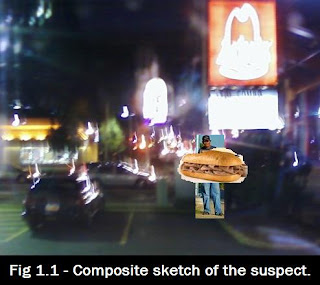 “Well,” she laughed, “it’s gone now. Somebody took it.” To which, she and the crew started work on fixing me a new sandwich.

When my friend arrived, I told him this story, and he started laughing. “There’s a homeless guy standing out by the sign. He’s eating food out there.”

It was a cold night.

“I was wondering why someone would want to eat outside tonight.”

Perhaps it was a mix-up. I have my doubts. The bum is guilty.

Well, I should have compassion, I mean, he’s probably homeless and hungry. Very hungry. So hungry, in fact …

It sounds like a lame excuse, but it may mean tonight’s live show may start...

I’m generally level-handed, politically.  I do learn conservative thanks to my upbringing in the Intermountain...

Here’s a video from Rocky Mountain News worth watching: Final Edition from Matthew Roberts on...

Demand for my terrible final project from German class started swamping me today. It came...

It’s official. Sweeps weeks are stupid, in my humble opinion. About four times a year,...